The use of native collector urchins to manage invasive seaweed on a patch reef in Kaneohe Bay: a project of the Department of Land and Natural Resources Division of Aquatic Resources (DLNR press release, 17 August 2010) Official press release: http://hawaii.gov/dlnr/chair/pio/nr/2010/NR10-105.pdf At the start of this experiment, the patch reef was cleared of invasive seaweed using the Supersucker. Native collector urchins were then placed on half of the patch reef, while the other half of the reef was left alone. Although these sea urchins are present in a number of habitats statewide, they are largely absent from the bay. Divers periodically moved the sea urchins back to their half of the reef, as no physical barriers were used to divide the patch reef. The reef was monitored monthly and the percent of invasive algae was estimated. The urchins grazed the invasive algae throughout the one year experiment and have kept algal coverage to a minimum. On the urchin-free side of the patch reef, invasive seaweed coverage returned to pre-Supersucker levels within six months. The next part of this experiment will be to move the sea urchins to the non-urchin side of the patch reef. This time, the Supersucker will not be used to clear the seaweed first. The team will monitor how well the urchins do without first removing thousands of pounds of seaweed, and will also document how quickly the invasive algae rebounds on the side that had been grazed for the past year.
Read More 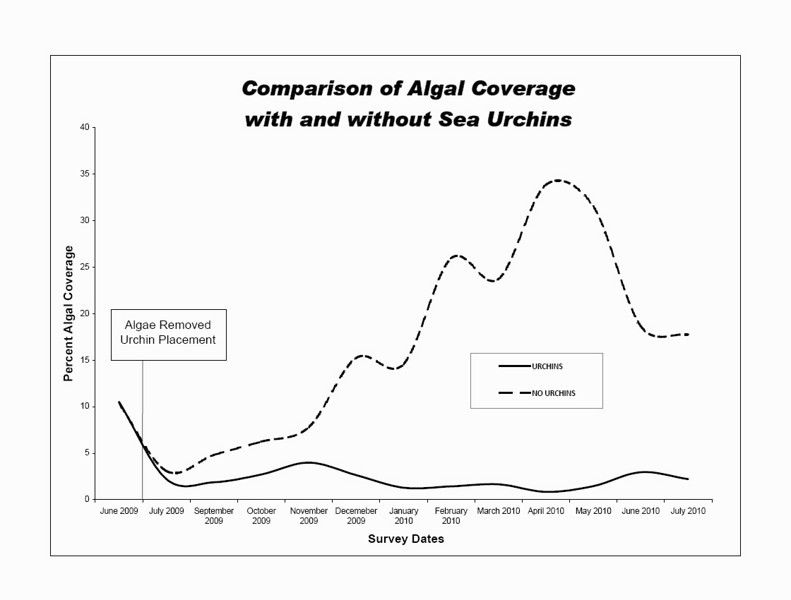